Each year, the nation’s top undergraduate students travel to Osgoode Hall Law School in Toronto, to compete at the Osgoode Cup National Undergraduate Mooting Competition, to represent their universities with their oral advocacy and mooting skills!

Held for the first time in 2005, the Osgoode Cup has a long tradition and is known to have many of the top Canadian universities represented amongst its competitors.

We are thrilled to announce that 6 very motivated members of the Queen’s Pre-Law Society attended the Osgoode Cup Undergraduate Mooting Competition this past weekend, March 3rd and 4th, to represent Queen’s University at this prestigious tournament.

After weeks of preparing submissions, thoroughly analyzing legal provisions, and extensive practicing, the undergraduate students – all 1st and 2nd year students! – competed in 4 preliminary rounds of Mooting and were judged and scored by renowned, Canadian legal professionals.

This year, in particular, was a very special one for Queen’s University, since it was the second year that the school had sent competitors to this tournament in quite a long time and was also the first year in a very long time that one of Queen’s very own teams qualified to the quarter finals of the tournament!

Helen Kosc, the club’s very own Public Relations Director, and Nicole Pede advanced to the second day of competition, finishing as the 12th team overall, in a tournament of over 200 competitors!

Helen was even recognized for her tremendous individual performance, earning a Distinguished Advocate Award – which is given to only 9 individuals out of the 219 competitors!

All the QPLS competitors did a terrific job and learned a tremendous amount from this unique opportunity, which will truly assist them in their future academic – and perhaps legal – endeavors.

Although this concludes Mooting Season for the 2017/2018 school year, we cannot wait for what the future tournament’s have in store for us! And who knows, maybe by next year the QPLS team will have doubled in both size and determination!

Until next year, Osgoode Cup! 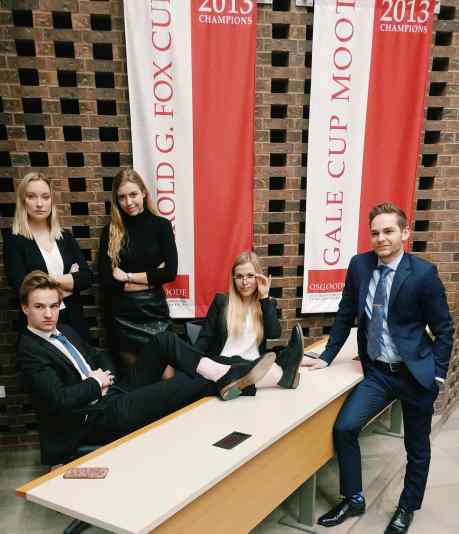